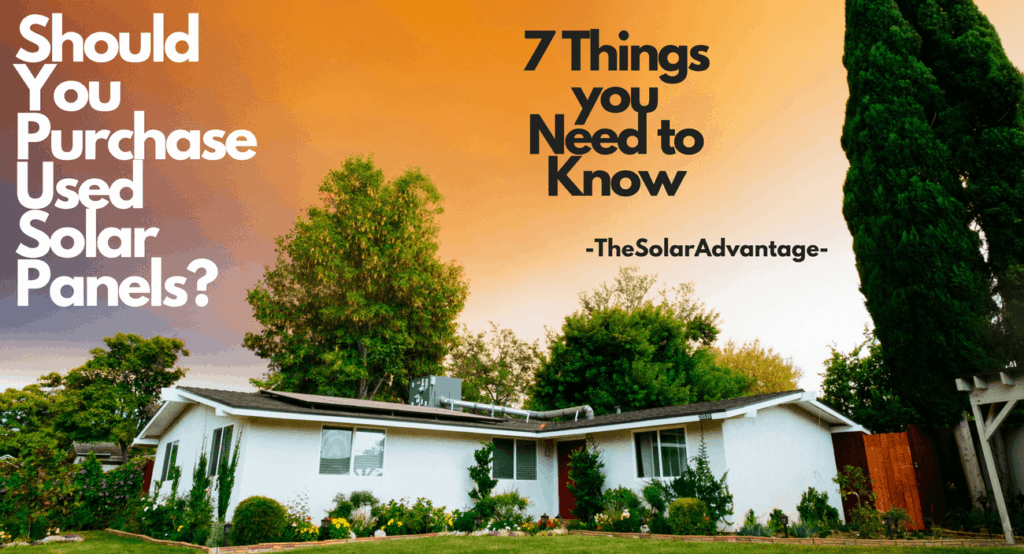 Should You Purchase Used Solar Panels? 7 Things you Need to Know

Solar panels are a large investment, and price is usually cited as one of the reasons why people generally don’t look into solar as an alternative to their monthly electrical bill. Solar panels have been around for a while now, and like cars, there is a large amount of used panels entering the market.

Used solar panels are cheaper than buying whole new panels for a variety of reasons. Here, we’ll go over some of these reasons, as well as an overview of what to consider when looking for an alternative to an expensive new system.

​While solar panels will continue to produce electricity as they age, the efficiency of these older panels and therefore the amount of power that is generated by used panels is slightly less than those newer panels.

As panels are exposed to the environment, they tend to becoming a little discolored, and generally do not receive as much direct sunlight as they used to. Amorphous silicone panels in particular are well known to produce slightly less power as they age.

While this is something to consider, it doesn’t mean that used solar panels don’t work well. As a result of their lower output, you might need a few more panels installed on your roof in order to produce the same amount of power as a new installation.

As time goes on, the efficiency and power output of solar panels has increased, meaning that the same amount of panels generate more energy per square foot with panels that are newer. As explained in the previous section, this isn’t necessarily a problem, but it is something to consider in regards to installing the panels on your roof.

If you have a small roof, you might not be able to fit more panels on your roof to make up for the fact that older panels don’t produce as much power. Some residential communities might have rules against putting up a large solar array, but they might allow for a smaller size array. Make sure to check with your residential community association to make sure that they approve of the size of your solar installation before you purchase your solar panels.

​Sometimes the connection between the cells in the solar panel become loose as a result of the time they spend outside. In serious cases, the solar panels with loose connections will not produce energy from sunlight at all.

These loose connections will affect the performance of the solar panels, something which is not a problem in new solar panels.

If you can get these loose connections fixed, you can probably get the panels at a pretty great discount. To get them fixed though, you’ll need an electrical soldering tool, a steady hand, and solid background in electronic equipment.

​By being outside, solar panels can experience hail, windstorms, rain, heavy snowfall, freezing rain, tree branches falling on top and general wear and tear. All these issues can cause cracks or scrapes, and can cause moisture to get underneath the glass and cause corrosion.

These problems could be fixed, but would also require an understanding of what you’re doing, and the equipment needed to fix it. Keep this in mind while checking the price someone is asking for used panels.

​Solar panels are measured against the cost of the energy output from the panels. Over time, the cost per Watt (Watts are the measures of energy) of consumer solar panels has been coming down, dropping by over 50% in the last 2 years alone.

If you’re purchasing used solar panels, you can probably ask the owner to check the voltage they are producing before you buy them. You would have to check the output from each panel in order to figure out if you are getting a good deal or not.

​When solar panels are damaged below the surface, there is a potential to identify the problem In order to do this, the output of the solar panels would be unsteady. This can be fluctuations in the output voltage, which is easy to identify when you are testing the panels before purchasing them.

​Where to Buy Used Solar Panels

​Solar panels are typically sold from private buyers, who chose to post their solar panels on internet websites. The most likely spot to find used solar panels advertised is on EBay or Craigslist.

Those who are selling their solar panels have had experience with them, and will generally be looking to upgrade their existing solar installation to a newer and more efficient installation. While this is generally the case, always inspect the solar panels that you are looking to buy before you purchase them.

All solar panels have the potential to break if they are not properly maintained, and the older they are, the more likely they will be to have issues that prevent them from producing a steady supply of electricity.

​​Used solar panels are generally much cheaper than a whole new system. This is a result of a lower energy output potential as a result of increasingly efficient solar panels, the age of the solar panels which might have resulted in damage that would time consuming to repair, or issues around damage received due to a extreme wind and weather.

If you are technically savvy, or willing to learn how to work on used solar panels, you can generally fix most of the issues that old solar panels would have. However, keep in mind that this might take a long time, and as a result, it might not be worth it to you to invest in a used system.

However, if you are looking to save a few thousand dollars to have solar energy on your home, used solar panels can be a first step. If you like the experience you have with your used solar panels, you can look to install a newer version at a later date.

How Many Solar Panels Do I Need? Easy Calculation

How Long Do Solar Panels Last?