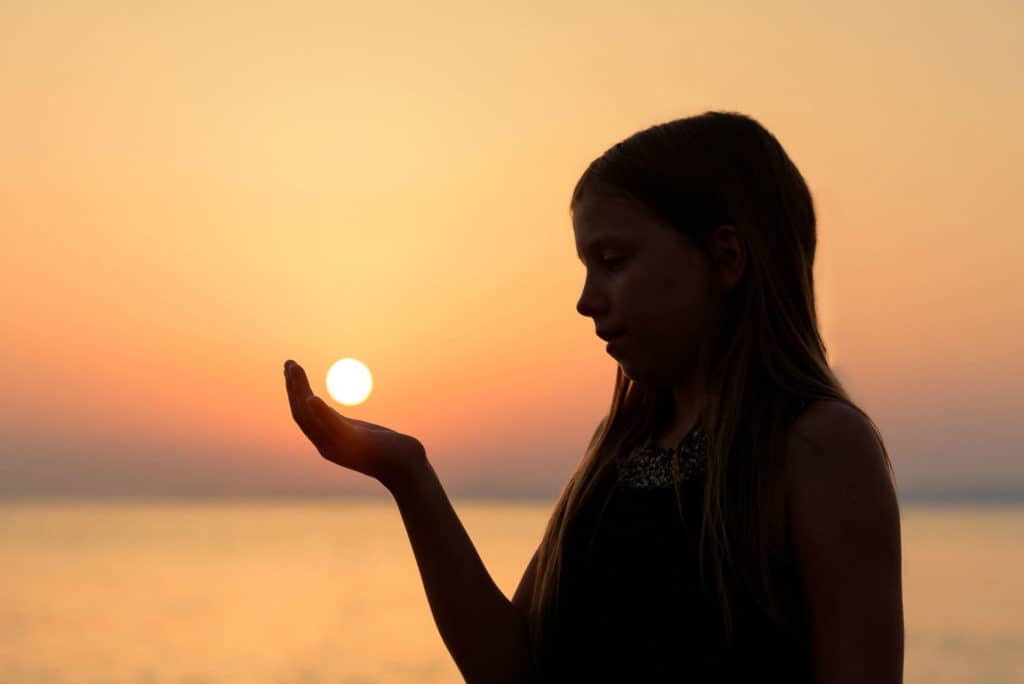 Teaching your Kids about Solar Energy

The sun is more than a giant ball of burning gas billions of miles away that provides light during the day, and a shiny moon at night. The energy that this burning star produces gives us all living things on Earth, including the grass in your yard, the trees in your nearest national park, and the herbs that add the finishing touch to a restaurant meal.

However, it is only recently that the full potential of the sun has been developed. Thanks to a new generation of technology, we are able to heat our homes with collected solar energy from the sun, heating water for your morning shower, and producing electricity that allows you to watch your Sunday morning cartoons.

The basics of solar energy began in 1830 with the creation of a solar oven by John Herschel. Solar ovens are used even today, with the greatest purpose to create amazing pizzas in your own backyard.

In 1839, Alexandre Becquerel discovered that certain materials produced electrical current when exposed to sunlight. This helped his student, Richard Evans Day, develop a basic solar cell from selenium, an element that is still used today.

This type of electricity, called photovoltaic, is derived from Latin; photo is pertaining to light, while voltaic refers to producing voltage (in other words, producing energy from light).

The first true solar cell was produced in 1954 at a cost of $1,785 per watt ($16,286/ watt today!) Today’s solar energy is being produced at around $2 per watt, and it is being deployed in large quantities, and is cheap enough to be installed on individual homes.

Solar energy does not produce carbon dioxide emissions that are associated with most other forms of energy. Coal and natural gas both produce dangerous pollutants that can be harmful to humans.

The installation and production of solar cells also produces much less environmental damage than traditional forms of energy. With the advent of electric cars, it is even possible to eliminate emissions from school buses and the family car.

Solar energy however does have some drawbacks. In winter, there is much less sunlight reaching the Earth. This is also due to the heavy clouds and heavy snow that happen in the winter in areas in the North.

This also means that there is a variable amount of power that can be generated in any given day, and it is impossible to produce any energy from solar panels at nighttime.

How do Solar Panels work?

Energy from the sun is composed of particles called “photons”, which carry a certain amount of energy. You don’t feel these particles, but some materials react when they are exposed to these particles from the sun. These special materials are called “semiconductors”, and are what make solar cells effective energy generators.

Not every single photon that hits the semiconductor material produces energy however. Some photons hit the material, others reflect off the surface, and other pass right through the material. Only the photons that are absorbed into the semicondouctor produce energy (around 20% of all photons do this).

Research today is focused primarily on finding materials that are able to capture and absorb even more photons, and therefore produce even more energy. There is tons of potential for future research in this area, and job opportunities are plentiful.

Where are Solar Cells Found

The simplest solar cells are found in small handheld devices, such as your calculator that you use for your math tests. However, with newer and more powerful solar cells reaching the market, they can be found in all kinds of applications.

Solar cells are being installed on large rooftops of buildings, and can supply enough electricity to power them for almost the entire day. Smaller versions of these solar panels can also be found in backpacks, and can be connected to a computer to provide power in remote locations, such as when you are camping.

Sometimes, these solar panels are connected to a battery, and can be used to give light to nighttime campfires and power a water heater for making morning coffee or tea. Batteries are also able to provide power to your home if there is a power outage, and can help to prepare you for a major emergency.

More recently, solar panels are being installed in large fields to create enough electricity for multiple homes. Areas of farmland that are no longer able to grow any crops are the ideal locations, as they help to produce clean energy for the farmers.

They are also being installed over areas that used to mine coal, as they are usually areas that are so contaminated, that nothing can grow or live there. Any area that has wide open space, or faces directly towards the sun all day are the best locations to install these large solar arrays, as these areas are less obstructed, and more direct sunlight has the highest chance of having a photon be absorbed into the semiconductor material.

Other Applications of Solar Energy

Solar energy can be used to heat water or air, and can be incorporated into your family home. By using the sun, this can help reduce the amount of electricity needed throughout the day to keep you warm. There are both active and passive systems that can be used to capture solar energy.

Passive systems heat your home when the sun shines through windows and is collected inside the building. Homes that are designed with lots of windows that face the sun, and have high insulation are great ways to reduce the amount of heating in winter.

Active solar heating uses a conductive metal material that surrounds a warming fluid, usually water, that is then circulated within a home. It is also possible to store heated water in a tank for later use, either for a morning shower or for being used in washing dishes.

How does Home Solar Power Work

Home solar is a rather simple process, could end up saving you money in the future, especially as electricity prices continue to increase. Sun shines directly onto the solar panels, generating DC (Direct Current) electricity, a form of electricity that all appliances in your home cannot use.

Therefore, an inverter is used to convert the DC electricity to AC (Alternating Current) electricity, which can then be used by all your appliances.

If your appliances are not able to use all the electricity that is generated from your solar installation, the extra power is sent into the grid for others to use. At times when you generate more power than you need, you are able to sell this electricity.

However, since the electricity from solar is variable (for example at nighttime there is no energy from solar that you can generate), by staying connected to the grid, you are still able to have access to power when you need it.

Solar energy has all kinds of applications, that can be used to lower your carbon footprint, save you money, and even help make your next camping trip a little greener. There are some limitations to solar energy, mainly that it isn’t a great solution for nighttime electricity generation.

However, it is getting cheaper, and with rising electricity prices, it could help save money in the long term. It is also a really cool technology, and new innovations are making it possible to use solar power in even more ways than ever before.

Check out some these other links to get a better idea on what solar energy is all about, and what it could mean to you.