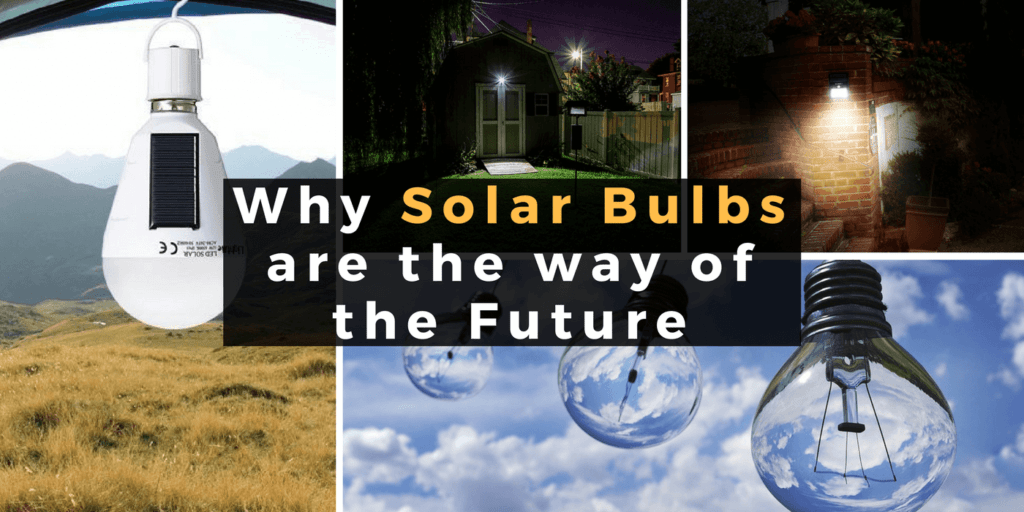 Why Solar bulbs are the way of the Future

Solar is reinventing the way that consumers across the world live. Browsing the news today, we see how solar is bringing electricity into remote villages across countries like Kenya.

Solar is being used in unique art installations across the world. To an extent, solar is a major aspect of leading scientific innovations. It’s being used to build solar street lighting. It’s also being used by everyday consumers to save on energy costs.

Beyond the more advanced innovations in solar comes a consumer product that we can all benefit from.

Solar bulbs, such as the LightMe 12W, have hit the market and are garnering strong reviews online. These solar bulbs go far beyond the performance of its predecessors, making it easy for consumers to enjoy a high quality product at an affordable cost.

There are many benefits to looking into purchasing solar bulbs for your home and/or lifestyle. Here are a few reasons to consider.

Many solar bulbs are able to be recharged anywhere under the sun. Therefore, unlike a traditional light, you don’t need a plug outlet for these. This equates for a great choice as an emergency light should you require one indoors or outdoors on your residential property. Also, consumers have been known to purpose these in camping, hiking, tenting, fishing, and/or for related emergency purposes.

It never hurts to have a product as dynamic as some solar bulbs. During the warmer, summer months, these are a great item to set ambiance or to provide utility when you need it. The alternative, in most cases, is to use battery-powered lighting or installed electrical lighting which are either terrible for the environment or expensive to keep running. Instead, choose solar.

A big worry among early consumers of solar lights and common complaints in years past was that solar bulbs were simply not bright enough to compete with other bulb types. At this point, solar bulbs have come pretty far. They are being used not only outdoors to light barbecues, barns, and open-air parties, but they are also being used indoors to do what traditional lighting does.

For the first time, the affordability of solar bulbs make it so that you can do away with having to buy bulbs again and again. The LED bulbs in these solar accessories can be used as traditional incandescent light, fitting with most connectors. If you live in an area that is prone to electricity shortages, many households would be well advised to have solar bulbs easily accessible. As emergency light, they are second to none and when power is cut, they can provide light for up to six hours.

Many solar bulbs are relatively easy to use. All that needs to happen is to hold the light, press the top with your finger, install the hook, and then press the switch. From there, it works its magic.

Solar bulbs use the sunlight to charge its battery and can typically store enough charge on an average day to hit its maximum. Depending on weather conditions and where a solar bulb is positioned, this does vary.

The convenience of use and the ability to essentially install light wherever need be certainly does come in handy.

Save Energy and Save Money

The big thing that people want to hear about solar bulbs is generally what the expense is. Luckily, with how this technology has developed over the years, they are less expensive today than they’ve ever been. When you buy them on sale, they may even end up cheaper than regular bulbs.

From an energy standpoint, a solar bulb is powered by two or three solar panels typically. In the long run, this means less power consumption on the grid overall and a more environmentally friendly household.

For anyone seeking a cheap, effective way to light a space, solar bulbs can be inputted into any location and you won’t have to throw everything in your wallet at it to do so. Also, the energy savings may not seem like much to a consumer but one may be surprised by how much they can reduce their carbon footprint over the course of a year by employing solar bulbs. All that you need to do is to make sure they get their charge during the day and then, at night, they’ll use that stored energy to shine. No additional energy consumption needed.

Waterproof and no Overcharging

Though not all solar bulbs come with this level of protection, the LightMe 12W solar bulbs do. Buying these, one gets a lot of added value including a waterproof rate of IP65. This means that there shouldn’t be any issues getting a little rain on them. Additionally, the large capacity battery built into these solar bulbs provides a block on any overcharging.

While we’re on the point of the LightMe 12W solar bulbs, the switch on the hook really will come in handy.

Making it convenient to carry to any place, the fact that there are no wires or circuits needed and also with the familiar screw base E27 being employed, you won’t find a better solar bulb on the market. Considering everything that is currently available, this may be the best recommendation for anyone who is looking to use it in hiking, camping, fishing, or in outdoor use.

For Solar Bulbs, the Reviews are In and they’re A+

There is much value that can be placed in hearing how the product works from other consumers who have bought it. For any solar bulb, one is strongly advised to check out product reviews not only to confirm that it is worth purchasing but to identify some of the common or uncommon issues others have had with it.

Examining the reviews for the LightMe 12W solar bulb, this might be one of the better reviewed solar bulbs on Amazon. Among the better ones, there’s one consumer who bought it for their 6×12 chicken house, saying “It works great, is built well, and provides a lot of light for a solar bulb.” Another consumer who installed this same solar bulb in their dirt bike trailer described it as a “Great light, very bright.” A third consumer who just happened to leave a five-star review described the LightMe 12W solar bulb as a “nice little light, worked out of the box.”

Even better on these reviews, many buyers have left pictures giving other customers the opportunity to see the solar bulb in action.

Looking through these pictures, it’s quite evident that these are very powerful bulbs. In terms of what consumers need them to do, they don’t come up short. For any smaller sized area such as a shed or something similar, a solar bulb like this is a perfect option and far easier to set up than the more traditional options.

Using them around the House, they can be Handy

Though much of the focus for solar bulbs is outdoor use, they can be used for indoors. More consumers than ever before are looking for different ways to create an environmentally friendly home while lowering costs. There are a number of solar power-related innovations that have attempted to find a way into residential homes but nothing is quite like a solar bulb.

The concern evidently is where to place it because it does need to get that charge. Among the consumers who have bought solar bulbs for in-home use, placement in a well-lit room during the day or setting it up by a window as a permanent solution can provide all the charge it needs.

With each passing year, sales for solar bulbs have continued to grow as more consumers are getting interested on the different ways to green-ify their lifestyles. Nighttime solar bulbs are a comfort to anyone seeking a dependable environmentally responsible light source that can be used year-round.

Much of the application of these kind of solar bulbs and others has been focused on providing electricity in developing nations. For example, the Philippines recently saw thousands of its citizens use solar bulbs to bring them light during a recent flood. In areas where poverty is high, these solar bulbs mean a lot.

Additionally, with the onslaught of flooding and hurricane weather in the southern United States this past year, we’ve all come to know the meaning of being prepared for any emergency. With a solar bulb, you can’t go wrong. For when you need it most, as long as it’s able to grab a charge, it’ll be there for you.

As solar bulbs continue to be brought to a larger marketplace in developed countries such as Canada and the United States, consumers have the opportunity to jump on solar at an affordable price point.

Whether it’s to stand up in the face of a natural disaster, to brave a chilly winter evening, or to light the way when one is out on a nature excursion, solar bulbs such as the LightMe 12W pass the test!

Choose the LightMe 12W solar bulb to light your space and receive a reliable, high quality product that you will love!